Constant trips to the bathroom, bleeding, fatigue and pain – you had a feeling something wasn’t right, but assumed it was nothing more than irritable bowel syndrome or stress. You make an appointment with the doctor just to be safe, who recommends a colonoscopy and during the follow-up visit you are given the news – you have Ulcerative colitis (UC). And now you’re thinking to yourself, “where do I go from here?”

I was just like you – sitting in the office, bewildered as the doctor read my diagnoses. She might has well have been speaking in tongues because I had no clue what UC was nor did I have any idea of how my life change because of it. But here we are, one of some five million people worldwide suffering with an inflammatory bowel disease. The first question many have after their diagnoses is what should they do next. I myself did nothing. I went about my daily routine and just dealt with the symptoms – and it was a nightmare. I would cry in the bathroom at work, nearly fall asleep at my desk and spent the majority of social events sneaking off to the toilet. And the whole time I wondered why this was all happening.

I have to admit that when I left the doctor’s office after my diagnoses, I did not even google “ulcerative colitis” to find out what it was. Even though the doctor told me it was a life-long thing, I just did not have the time to deal with it – and that is the biggest mistake you can make.

It wasn’t until last fall did I give in and start taking care of myself. The symptoms had worsened to the point where it was difficult to function and I knew it was time to face the illness. Since then, I have been up to my ears in UC information, but what I found most helpful, is that I am not alone in this battle. I was so embarrassed to talk about what was happening with my body because it had a lot to do with bowel movements – and no one wants to hear about your constant diarrhea and rectal bleeding. But now I realize that it is so much more than that, it is a disease caused by ulcers forming in the large intestines that takes a tremendous toll on you both physically and mentally. Ulcerative colitis is a chronic illness that creates internal pain. It comes with severe fatigue, hinders concentration, makes you irritable and damages your self-esteem -things your loved ones may notice but do not understand why.

My first piece of advice to new members of the UC club is to not be ashamed of what you are going through. Tell your family and friends, talk about your symptoms. The only person who had any idea what I was going through was my husband, who has been my rock through all of this, and because of this shame, I felt battle alone. It was mainly due to the fact that I did not think anyone could understand and I was afraid they could not see it as anything more than irritable bowel syndrome. I also felt like an outcast, because I cannot eat certain things and need to be in a place with an available bathroom – limiting where I can go with friends and family. But when I finally opened up, they were more than understanding. A few of them even told me they knew someone else who had ulcerative colitis and saw the hardships they were enduring. Of course, you do not want their sympathy, but it is nice to know that others understand why you cannot make it to a social event or why you just spent the past hour in the bathroom or an entire day in bed.

The next step in this journey is to tackle your diet. Although UC is not a result of a bad diet, certain foods can trigger a flare-up or worsen your symptoms. It is crucial that you determine which foods your body can handle and eliminate the ones it can’t. I suggest logging everything you eat and paying close attention to how you feel after each meal. This will give you some insight to what needs to be cut from your diet. I have seen people online ask for an ulcerative colitis diet, but there is no one size fits all. What one person can’t eat, may be fine for the next. 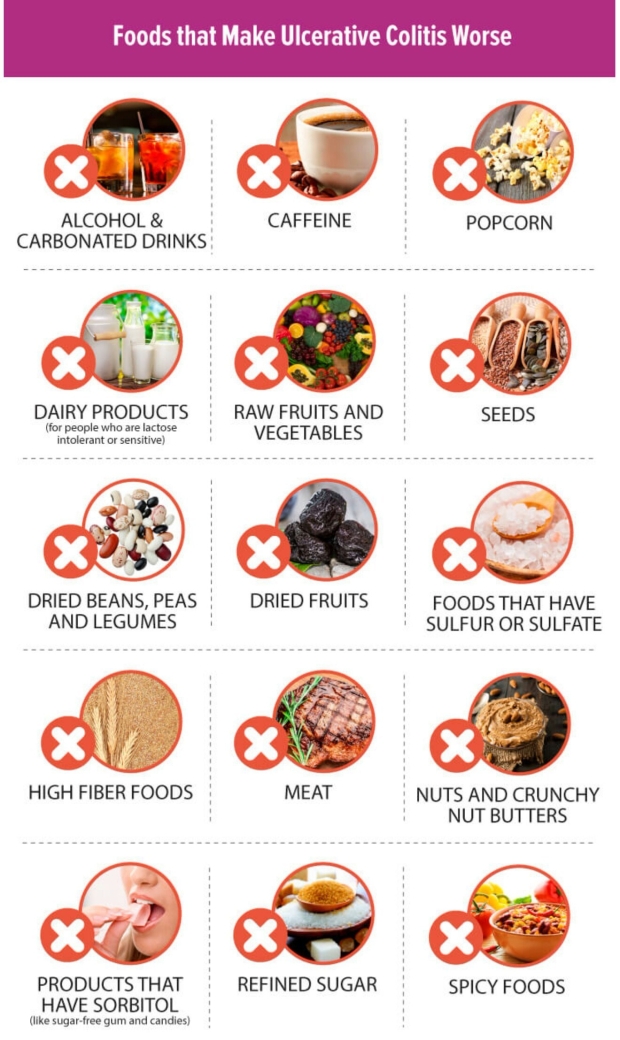 However, there are a few things I have noticed that most people with UC cannot handle, such as dairy, red meat and starchy vegetables and fruits. I slowly started eliminating these foods from my diet and have seen a change in my symptoms for the better. You have to face the fact that you may not be able to eat what you want anymore. It is a tough thing to come to terms with. While your friends are enjoying a juicy steak or finishing a meal with a slice of cake, you will be sitting there with envy. But think of it this way, the food we can eat is all pretty healthy. My diet consists  of lean meats, such as chicken and turkey, and vegetables. So don’t look at this as a punishment, but an opportunity to become a healthier person.

I also suggest checking every food label, because you will not believe how many things contain milk, excessive sugar and nuts. For my UC fitness lovers, my piece of advice is to get rid of your whey protein and switch to a plant-based powder. After I decided to eliminate dairy I was still not feeling that great. I was bloated all of the time and had that urgent and constant need to go. Like most avid gym goers, I was a huge fan of whey protein. I had at least three shakes a day, a delicious protein bar when I could and incorporated it into any other food possible. It never dawned on that this protein powder was wreaking havoc on my body until my husband took the time to read the ingredients. Since trading whey for the vegan stuff, I no am no longer dealing with the same bloat and constant trips to the bathroom as before.

Other than finding the right foods, it is important to get the proper medication and stick with it. I was first prescribed enemas and was not a fan when it came time to administor them. I gave up about three weeks into the cycle and my symptoms became worse. However, instead of asking my doctor for something else, I just suffered through the pain. Ulcerative colitis will not get better on its own, nor will it just magically disappear one day, which is why you need medication to get it under control. I have seen a few YouTube videos where people traded their meds for homemade juices. But since I have only been dealing with UC for a year, I feel it is important to first take medication and then down the road, it might be possible to do it the natural way. I am now on balsalazide disodium 750 mg – I take three pills, three times a day. This little white pill has really made a difference in my symptoms. Although I still have bleeding, I no longer spend hours in the bathroom. But again, this is not a cookie cutter illness, so you should work with your doctor to find what fits your case.

As mentioned, my symptoms have improved since taking balsalazide, but I am not yet in remission. What I have learned over the past few weeks is that it is important to enjoy the days you feel good and do not let the bad ones get you down. I have been taking this medication for over a month and have only had one horrible days since. When I say horrible, I was hunched over the toilet screaming and crying for about 45 minutes and then laid in bed for the rest of the day. By the next day I was fine, but all I could think about was how much pain I was in. I was doing so well, not just physically, but since the symptoms had improved so had my outlook on this illness. And this one day had erased all of it. I was back to worrying and feeling sorry for myself. I even told my husband that I want to have surgery done so I don’t ever have to go through that again. Ulcerative colitis is a roller coaster and there are going to be a lot of ups and downs, but just like life, you need to focus on the positives – otherwise you will end up making the illness worse.

Worrying about what tomorrow holds will only make you stressed and just as food can trigger a flare-up, so can stress. I myself suffer from anxiety and stress, and have found that they enhance symptoms. My husband is constantly telling me to calm down for the sake of my health. The idea that stress can make you sick may sound ridiculous, but it plays a major role in UC. We all feel the pressures of the world and when that happens our body goes into fight-or-flight mode by releasing certain hormones, which stimulates the immune system. Because our immune system attacks our body, it is like stress wakes the sleeping giant and that is when symptoms can be heightened. A study published in February 2013 in the journal Gastroenterology Research, found that high levels of stress can lead to a flare. Approximately 50 participants with an Inflammatory Bowel Disease in remission were asked to keep a symptom journal. Those who noted they had “quite a lot” of stress on a specific day were 4.8 times as likely to have a flare within the next day. So when you find yourself becoming overwhelmed, just take a step  back and realize that the anxiety you are feeling is not worth the pain it could bring on.

Now that you have ulcerative colitis, you have to focus on your body and really listen to it. When it says rest, do it. Because you will experience severe fatigue from constant bowel movements and bleeding, your body needs time to recover. So, never feel bad about laying in bed for a few hours or even an entire day. You are not lazy, you have a chronic illness. This is one of the things I have struggled with the most over the past year. When I am having a good week, I will go to the gym at least five days, but when my symptoms are bad, I will miss a few days in a row – and it has been difficult to deal with mentally. However, I just remind myself that I am just taking care of the body I work so hard to perfect.

And the last piece  of advice I have for those who have been recently diagnosed with ulcerative colitis is to stock up on the softest toilet paper you can find – you will thank me later.